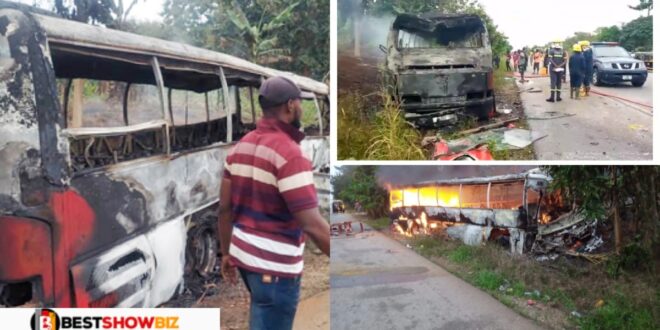 Akumadan accident: Bus driver on the run as police hunt him (Video)

The latest sorrowful news of the unexpected loss of 6 other people who were unintentionally burned to death at Akomadan has sparked widespread worry among family members and citizens.

The bus, which was traveling from Nandom to Kumasi, collided with a towing vehicle and caught fire after the driver lost control of the steering wheel..

A passenger tried to speak to the bus driver about his speeding, but he disregarded them and went on with his speeding, according to him.

Read Also  Here is Emefa, The Laday who says she can resurrect J.J Rawlings - Video

Because of the bus driver’s speed limit, he was unable to manage his brakes as he approached the barrier, and as a result, he collided with the towing car, causing the bus to catch fire after veering off the road and into the woods.

Occupants of the bus who were not able to flee were reportedly burned to ashes, while others barely escaped with their lives.

Unfortunately, the eyewitness reported that his brother, who was situated in the bus’s backseat, died as he continued screaming cry as the vehicle was burning.

The police have initiated a manhunt for the bus driver who unexpectedly crashed into a parked towing car, murdering innocent passengers on the spot, due to his negligent driving.

Read Also  "I prefer to be [email protected], than to marry a thing like Princess Shyngle" – Ibrah One

On the Akomadan road, six innocent passengers were killed as the bus driver unexpectedly left the scene.