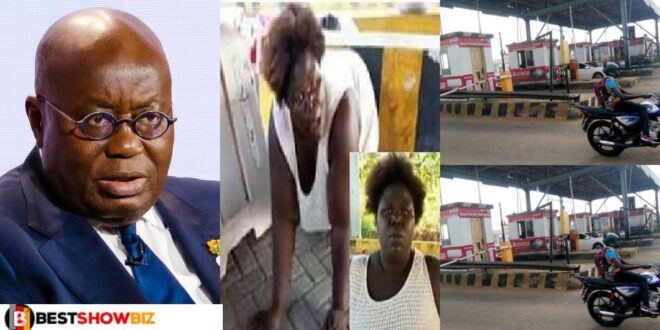 “Akuffo Addo please we beg you, i can’t feed my family if you close it”- Trader begs president after he abolished road tolls (video)

The elimination of road tolls was never meant to have a socio-economic impact on tollbooth vendors around the country.

The Minister of Roads has ordered the closure of 37 toll booths, resulting in the loss of hundreds of thousands of employees that were dependent on the tolls’ implementation.

For the majority of women who work at tollbooths, the early signals aren’t positive. The new directive has enraged a couple of traders at the new Beposo tollbooth on the Cape Coast-Takoradi highway.

Their lives would be flipped upside down as a result of the directive’s execution. This woman, who claims to be a widow, claims that there is nothing she can do to help her family given the circumstances surrounding their request for a reversal of the tollbooth closures.

As she tumbled around on the ground, she cried for help. She urged the President to take into account the directive’s implications.

Her family’s primary source of money has been the tollbooth, and she could scarcely get past the packed market in the streets and other trading places given her conditions. Despite the fact that it is disappointing, there is now little that can be done to modify the outcome.

During his presentation of the 2022 Budget, Minister of Finance Ken Ofori Atta claimed that these tollbooths contributed to the tremendous traffic on our streets, carbon emissions, and, most significantly, the squandering of productive hours.

Read Also  Ice cold broken heart: "I don't want you again"- Lady breaks up with boyfriend over the phone (Video)

It’s a little puzzling to weigh the rewards against the odds offered by these traders. Meanwhile, these vendors’ sole option is to compete with one another during traffic intermissions and other highway rest stops.

The streets of Ghana have been turned into a mini-supermarket. While you were driving down the road, these hawkers could sell you nearly anything. The times, however, have changed. They will eventually be phased away.