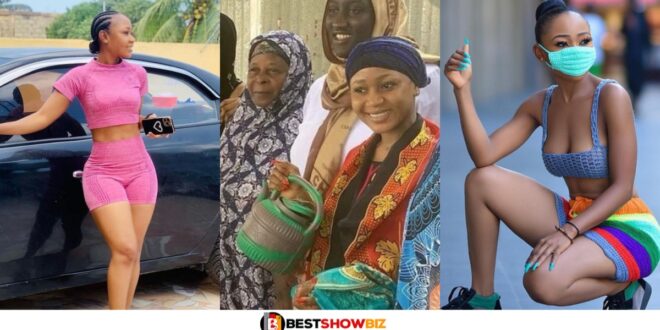 After converting from Christianity to Islam the day before yesterday, Akuapem Poloo, a Ghanaian actress and brand influencer who was born Rosemond Alade Brown but professionally known as Akuapem Poloo, took over the trends that were trending on social media.

The controversial female celebrity in Ghana informed her followers and the general population of Ghana about her decision to convert to Islam by posting a couple of photos to her Instagram account that showed her attending a local mosque.

Akuapem Poloo was seen wearing full Muslim garb while holding an ablution bucket and a prayer mat in the photographs that are currently going viral on the internet.

The following is what the captions that she affixed to the images say:

“Alhamdulillah full Muslim now, thanks to the Deputy National Chief Imam’s Quran Reciter and his board for assisting in this,”

Following the widespread dissemination of the information that Akuapem Poloo had converted to Islam, some detractors accused her of practicing Islam in order to gain influence.

Because, in the opinion of these individuals, Akuapem Poloo will revert back to her original settings once she has received the necessary attention, there is no point in taking her claims seriously.

Akuapem Poloo, who is visibly distressed and anxious as a result of the severe criticism, has provided her response to all of the pushback from her detractors.