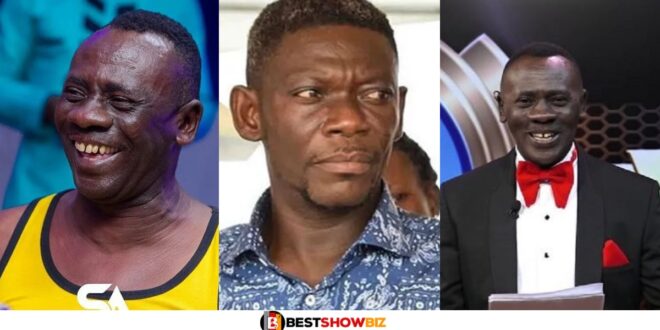 In an interview with Peace FM, Ghanaian actor and Kumawood veteran Akwasi Boadi, also known in media circles as Akrobeto, spoke out about an issue that has been on Ghanaians’ minds for a long time.

There were rumors that Akrobeto had been barred from appearing in films alongside fellow veteran Agya Koo.

He did, however, clarify the situation and stated that he had avoided the subject for a long time for fear of journalists misinterpreting his words.

He went on to say that he was advised not to appear in films with Agya Koo because he would be overshadowed, as Agya was huge at the time and he, Akrobeto, was just starting out. Miracle Kwasi Nyamekye, a top Kumawood producer, gave him the advice.

Read Also  Forget Beyonce, see list of all the Jamaican artist stonebwoy has had a collaboration with.

Akrobeto stated that he owes his career to Agya because he made Kumawood profitable and appealing for others like himself to benefit from.

According to Akrobeto, he did this because he felt he owed Agya his career because he helped him get to where he is now in acting. Akrobeto lavished praise on Agya Koo, stating that it was difficult for a film producer to sell a film that did not feature Agya.

Read Also  Beautiful University Graduate poisoned by a Man because she rejected his proposal.

Akrobeto mentioned an interesting name that was given to Agya back in Kumasi. He said they called him ”KingKong” due to the massive impact he had.