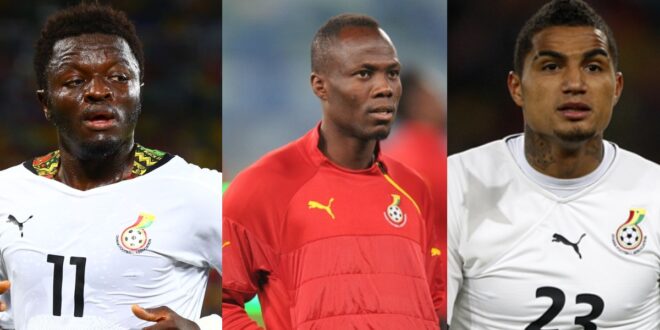 Emmanuel Agyemang-Badu, a former Udinese midfielder, has accused his fellow Black Stars, including himself during his time with the national team, of failing to assist Sulley Muntari during the 2014 World Cup debacle in Brazil.

Sulley Muntari and Kevin Prince-Boateng were fired from the Black Stars’ camp for indiscipline prior to the team’s exclusion from the 2014 World Cup.

The former AC and Inter Milan midfielder has never featured for the Black Stars since then.

Muntari always stood up for his teammates, according to Agyemang Badu, but we never backed him up in public.

“I think as players we did not help Sulley Muntari in some situations. I am also guilty I cannot exclude myself,” Agyemang Badu said in an interview on Citi TV.

“Most of the time he stood up for the team.

“However, we never mentioned it when we were out of camp.

“He would receive all the bashing because everyone is looking out for himself.

“I need to be real because there are times when it really hurts me.”