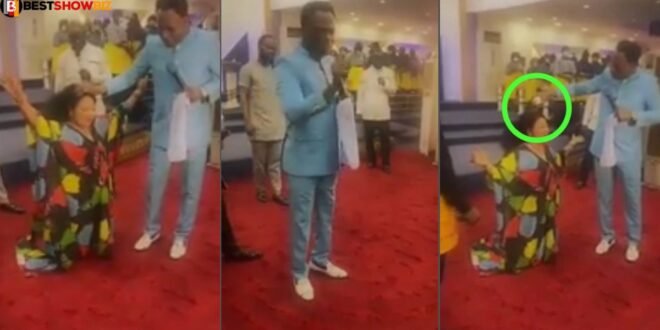 Prophet Amoako Atta is one of God’s most beloved men, with a good record for constantly prophesying correct prophecies. The man of God is a regular guest on Angel FM every morning.

His spiritual insight and enlightenment are appreciated. During one of his morning show sermons in Captain Smart’s presence, the man of God revealed that it was he who foretold that contrite Nana Agradaa would be a priestess in the first place and that she would be touched by God very soon.

His prophecy of guilt arrived at Agradaa’s door a few months later, and she welcomed it in.

In a video from the man of God’s amphitheater, Prophet Amoako Atta anointed Agradaa once more. The prophet claimed that the fire of God will come over Agradaa as he placed oil on her head in the video. Nana Agradaa was heavy with the Holy Spirit and could not walk properly after the passionate prayer. She required help before she could stand on her own.

Read Also  Adwoa Safo does not take chop money, she only takes my kid's school fees from me - Kennedy Agyapong reveals

If Prophet Amoako Atta is summoned by the Lord, he believes that the predictions he has made concerning her would be realized.