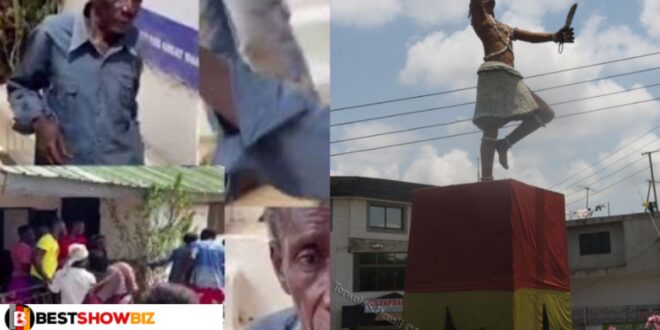 After ur!nating on the shrine of Okomfo Anokye, this man’s pen!s remains erected (video)

An elderly man who, out of ignorance, drew his manhood to urinate on Okomfo Anokye’s shrine in his hometown has had his Manhood stand erect for several days.

The man, who is believed to be in his 70s, drew a large crowd to the scene after it was revealed that he had urinated on the sacred shrine of Komfo Anokye in Awukugwa.

Videos from the scene show the man in his shorts with the Erected manh00d while he is in pain.

According to an Angel Fm reporter in town, the man is from Tutu and visited the Awukugwa temple yesterday.

At the shrine, he requested the hallowed space allotted for Komfo Anokye, drew down his shorts, and began urinating.

His manh00d Erected among discomfort after urinating, and it’s still up.

While many people sympathize with him, some in the town of Awukugua believe he committed it for ritualistic reasons.

Elders of Awukugwa have urged that the man’s family be consulted before appealing to the gods of the land to cure the man.