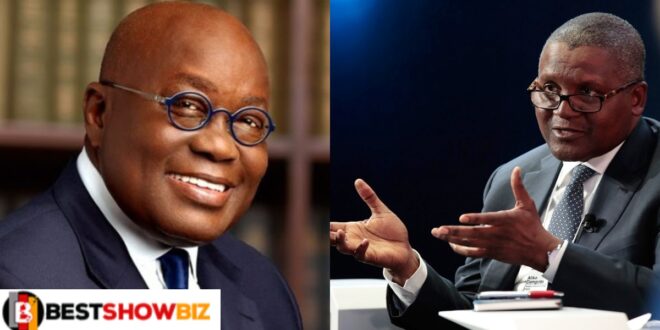 Aliko Dangote has expressed his forthright perspective on the kind of human resources required for Africa’s success.

According to the Nigerian business mogul, Africa requires only twenty such leaders, such as Rwanda’s Paul Kagame, Ivory Coast’s Alassane Ouattara, and Ghana’s President Akufo-Addo.

Aliko Dangote, the continent’s richest man, stated at the Africa Centre for Economic Reform (ACET) seminar that Africa requires visionary leaders to drive the continent’s transformation agenda, and he proposed the aforementioned trio.

“We do not need to have all 54 countries to have visionary leaders. What we need is a maximum of 20 of the likes of President of Ghana, Rwanda, and Cote D’Ivoire,” he said.

This remark from the African billionaire follows shortly after the president of the republic of ghana was awarded the African Of The Year.

Ghana’s President was featured in the December 2021-January 2022 edition of Forbes Africa’s magazine, which is stated to be available for purchase. The publication had Ghana’s President Nana Addo named the African Of The Year.

FORBES AFRICA shared the magazine’s front cover on its official Twitter page, complete with an embossed portrait of the smiling President.

[NEW ISSUE] #AfricanOfTheYear
@NAkufoAddo, Ghana’s President, has repositioned the country in the global marketplace as one reliant on its own resources and strengths. Get your copy of FORBES AFRICA and read an exclusive interview with #NanaAkufoAddo