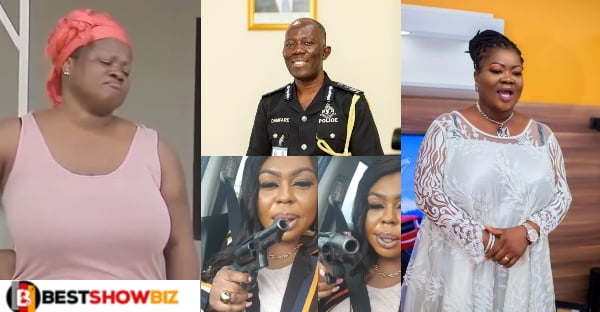 Since Afia brazenly criticized Mercy as a villager for traveling in a ‘cold jacket,’ the two of them have been at odds.

Mercy Asiedu and her team recently traveled to Dubai, and a video of her and her husband saying farewell at the airport went viral.

In the video, she was dressed in a tracksuit and a sweatshirt.

Afia made a video in which she attacked Asiedu as a peasant for wearing a cold jacket to sit in an aircraft.

Afia Schwarzenegger has gone over and above in a new video, threatening Asiedu’s life.

She stated that the fact that she is silent does not imply that she has forgotten what is going on.

She said that if she isn’t shooting, it just means she is keeping her pistols ready and waiting for the proper moment.

Schwar went on to say that even if she didn’t attack her with weapons, she would hire goons to do it.

What Schwar has done, according to netizens, is ten times worse than whatever Medikal was imprisoned for.

If IGP Dampare’s remark that no one is above the law is to be trusted, netizens think he must arrest her.

Check out Schwar’s video below…