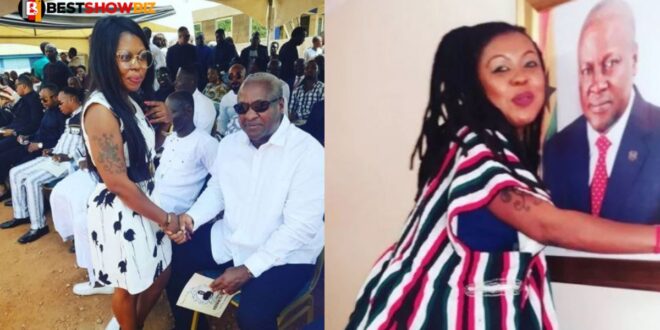 Valentina Afia Agyeiwaa, better known by her stage name as Afia Schwarzenegger, has recounted her first hug with former President John Mahama, which was witnessed by many.

It made her happy, adds the socialite, to receive a hug from the former President of Ghana the first time.

It was the first time Afia Schwarzenegger hugged John Mahama that she noticed he smelled good.

“My own father John Mahama, the very first time I hugged him,I sat in my car I realized that Oh My God, he smells good” – Afia Schwar

This was stated by her when she revealed her top 5 persons in Ghana who had a pleasant odor.

Among those mentioned by him were Fadda Dickson, Bola Ray, Sammy Awuku, and Ernest Owusu Bempah, in addition to the previous President.