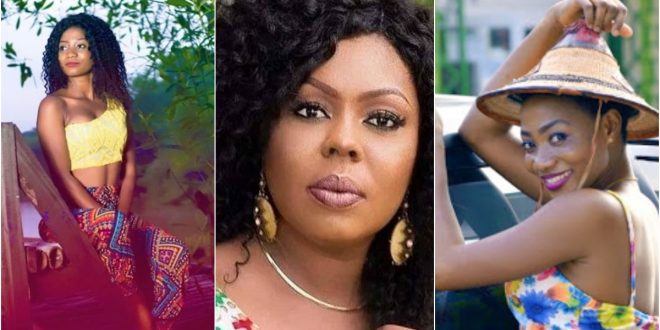 Afia Schwarzenegger is not a comedian, she only insults people – Maame Esi Forson – video

Self-acclaimed ‘Queen of Ghana’s Comedy’ Afia Schwarzenegger has been finally stripped of her position in comedy by Maame Esi Forson who happens to be the real deal(comedian) in town.

Maame Esi Forson became noted when her hilarious video skits went viral on social media. This got many Ghanaians tagging her as one of the very few Ghanaians who changed the face of Ghana comedy.

The female comedian has finally laid claim to the comedy throne and believes she’s the queen of comedy in Ghana as she claims to see herself as the real Queen.

She revealed this in an interview with Foster Romanus on e.TV Ghana’s The Late Night Celebrity Show. In the cause of the show, Maame Esi went all out on Afia Schwarzenegger who has been imposing herself as the queen of comedy in Ghana.

According to Maame Esi, Afia Schwarzenegger is only good at insulting people to make it into the trends but that cannot be classified as a comedy.

She said, “Afia  Schwarzenegger is not a comedian. She’s just a drama queen. I don’t see what she does as comedy, she just insults people directly with the aim that people will see that and laugh but that’s not a comedy. That’s why I don’t see her as a comedian.”