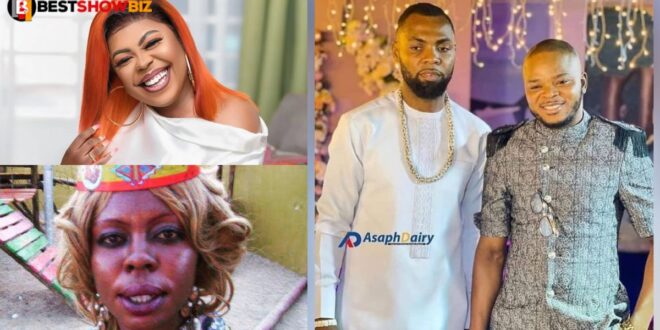 Rev Obofour has once again been targeted by Queen Afia Schwarzenegger! She’s managed to put Obinim in the shade this time for different reasons.

The Rev Obofour and Bishop Obinim are the new Susan Chanel Beauty ambassadors, according to Afia Schwarzenegger.

The outspoken socialite has shared a fresh snapshot of Obofour and Obinim on her Instagram page.

Afia Schwarzenegger has been at odds with Rev. Obofour for a long time since the man of God was enstooled as a chief in the Ga country.

Angry Afia Schwarzenegger began abusing Rev. Obofour and his wife, Bofowaa, despite the fact that they had been friends for years.

Read Also  "I can't keep quiet about this, Asamoah Gyan was the first man to give me broken heart"- Tv3 presenter

That resulted in a savage brawl with Ayisha Modi, but Afia subsequently said she was pleading with her to stop. Despite this, she fires Obofour whenever she gets the chance!

The Rev Obofour and Obinim recently smoked a peace pipe, putting a stop to their long-running feud. Obofour then went to Obinim’s father’s funeral last weekend to show his support.

Obinim showed up at Bofowaa’s latest birthday party to repay that courtesy, where they had a good time and spent some money.

All of this appears to be aimed at Afia Schwar, who has once again taken to social media to mock the two pastors.