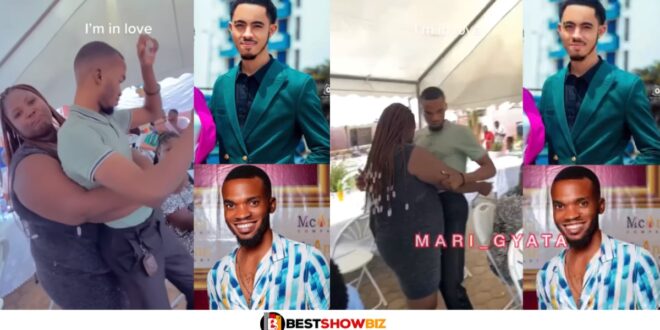 A video that has caused a lot of controversies features Afia Schwarzenegger’s godson Richard, who is said to be James’ gay boyfriend.

A video was taken of Richard at a program in which he was seen forcing his plus-size partner to cling to his body while they were dancing.

In the video, he can be seen acting in an odd manner while forcing himself on his female participant.

The video is currently generating reactions from viewers across social media platforms.

It would appear that some individuals have got into the speculation that Richard could be gay and could be acting in such a way to cover it up.

Odii Tonardo, a rival of Afia Schwarzenegger, recently disclosed in an outrageous video that Schwar’s son James is supposedly homosexual.

He claims that Schwar’s godson Richard is her son James’s lover.

However, Afia Schwarzenegger and James both refuted the allegations that were made against them.