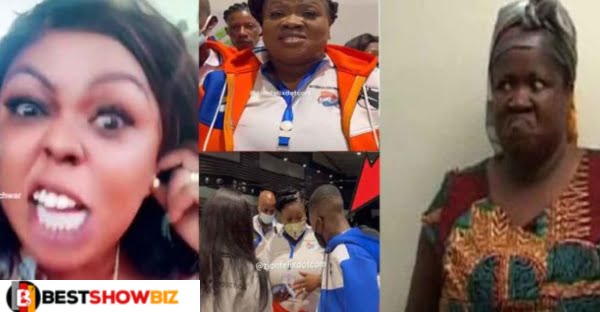 The rumored dispute between Afia Schwar and Mercy Asiedu over a “Winter Jacket” is heating up and it’s also becoming nastier.

The controversial comedian Afia Schwar attacked OheneYere Mercy Asiedu for traveling to Dubai with her 10 crew members while wearing a jacket. She labeled the veteran musician as a “villager” over just a winter jacket.

Afia Schwar used some foul remarks in a self-directed hostile assault on legendary Kumawood actress Mercy Aseidu in a video.

Mercy Asiedu, she claims, has embarrassed herself and Asantes significantly by arriving at the Dubai airport dressed as someone from an uncivilized society.

On Mercy’s behalf, Eno Mary, a crew member from MESDUA PRODUCTIONS, responded to Afia Schwar, exposing and criticizing her.

Read Also  Bogoso- Appiatse Explosion: See all the shocking photos and videos we found on the scene.

Afia Schwar, in a new video, has drawn Asantes into her spat with Mercy. She slammed them (Asantes) in her attempt to teach them how to dress.

In the midst of insults, she “educated” them on the difference between a sweater and a jacket. Afia again berated the Asantes describing them as villages who should stop wearing sweaters when travelling out of the country.

watch her new video below: