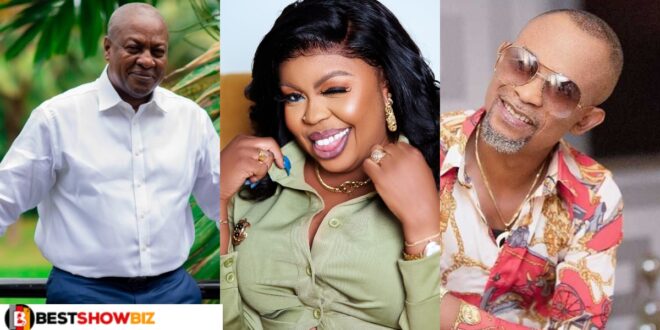 It is impossible to list all of the things that people fantasize about in their lives; the list can include something as insignificant as the smell of someone.

However, despite the fact that having body odor is absolutely unacceptable, only a small number of people are concerned with the smell of their own skin.

Controversial Afia Schwar, a Ghanaian actress, has compiled a list of the top 6 good smelling men in the country.

Fadda Dickson was at the top of the list, and this isn’t in any particular order.

Afia Schwarzenegger observed that after coming into contact with Fadda Dickson, it takes a full week for his odor to dissipate from the body.

In the opinion of Afia Schwarzenegger, Fadda Dickson possesses approximately 4000 different brands of perfume that he wears.

Bola, the CEO of the EIB Network, is said to have a pleasant odor. Afia Schwar revealed in a video that whoever visits Bola will undoubtedly return home with his scent on their bodies because he is unquestionably one of the men in Ghana who wears high-quality perfume.

KKD, a Ghanaian fashionista and presenter, was also included on the list. The middle-aged man, who is well-known for his exclusive fashion sense, is said to have a pleasant scent emanating from his vicinity.

Aside from his high-end appearance, he makes a good first impression with his olfactory sense.

Owusu Bempah is the fourth member of the group.

Rev Owusu Bempah, a Ghanaian prophet, is also one of those men who has a pleasant scent about him. According to Schwar, the smell of Owusu Bempah is extremely refreshing and leaves a long-lasting impression..

Sammy Awuku is the fifth member of the group.

Mr. Sammy Awuku, the Chairman of the National Lottery Authority, also has a strong presence through his smell. As a leader, the New Patriotic Party’s most prominent member is a gentleman who truly stands out from the crowd. Because of this, it is not surprising that he always appears to be in good health and fragrance.

Former President John Mahama is one of the top six most odoriferous men in Ghana, according to a survey. The former President, in addition to all the important things in life that he cherishes, enjoys smelling good and exudes a strong sense of authority with his scent.