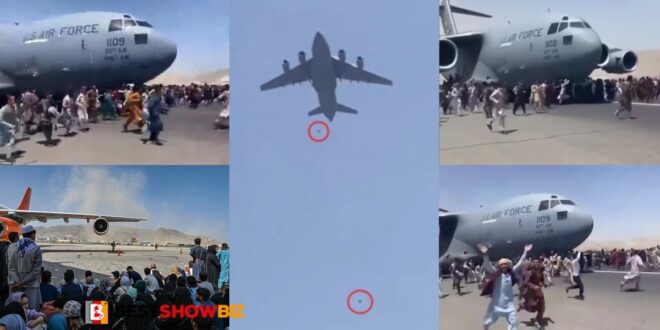 Afghanistan: Sad videos as people fall from plane after attempting to stowaway on US plane as they try to flee the capital, Kabul

Several Afghan stowaways who were attempting to leave the country were killed horribly as they fell from an airplane leaving Kabul.

After the Taliban toppled the government and took control of the Afghan presidential palace, people have been attempting to flee Kabul.

In the Afghan capital, there has been chaos. As some residents attempt to leave by vehicle, the footage reveals traffic congestion. There was also a lot of traffic for pedestrians.

Hundreds of people were seen climbing the wings of a US Air Force jet that seemed to be attempting to take off from a runway in the Afghan capital.

As an Apache aircraft attempted to clear the runway in one video, the area was filled with residents urgently attempting to flee the tragedy.

Another video appeared to show at least two individuals falling from the skies.

It is unclear if the two occurrences are connected or if the US Air Force plane was actually landing when individuals climbed on its side.

A horrific picture is also visible from the ground, possibly portraying the remnants of one of the corpses that fell from a plane.

“Locals near Kabul airport claim that three young men who were holding themselves tightly in the wheels of an airplane fell on top of people’s houses,” according to a Kabul news agency.

watch the sad videos below;