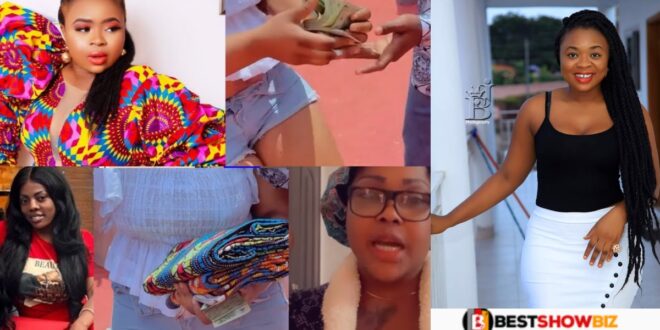 In an interview with Mona Gucci on the ‘Biribi gye gye wo’ Show, Nana Afram, a close friend of Felix Akwasi Kumi aka Nana Doe, has exposed Adu Safowaa.

According to him the actress, Adu Safowaa gifted her with a sum of Gh1000 as well as a car, which he delivered to her as a surprise birthday present.

In his statement, Nana Afram stated that the items he brought to the loudmouthed and controversial actress were supplied to him by her in order to play a public stunt in order to give the impression that someone had rather surprised her with those gifts.

Once again, the man informed the host, MonaGucci, that all of the vehicles in which Adu Safowaa travels to and from programs and interviews are not hers, but rather his.

Read Also  It's not bad to wash your woman's dross, I will do it for mine - Nana Romeo claims in a new video

He explains that he is a vehicle renter and that he considers Safowaa to be his sister, he offers the automobile to her anytime she requests it.

Take a look at the video below to see the interview between Mona Gucci and Nana Afram.