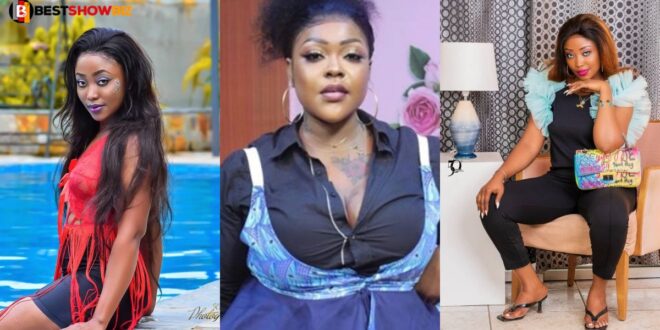 “Actress Joyce Boakye was a th!ef when we were in school, she has 4 children with different men”- Mona Gucci

It appears that Wahala no dey complete isn’t only a Nigerian problem; most Ghanaians also have issues with holding secrets or materials that aren’t always essential.

Joyce Boakye, a Kumawood actress, fired Mona Gucci on social media for discussing a video of her on an aircraft using the restroom.

It may be remembered that Joyce Boakye made news yesterday after she shared a video of herself relaxing in the plane’s restroom.

Although it is unknown why she filmed the video, Joyce became enraged when Mona Gucci chose to voice her view on the matter. Joyce referred to Mona as an ashawo (prostitute) and warned her that she would regret what she had done.

In a recent development, a social media user chose to expose a secret regarding Monad’s high school days.

Mona traveled to Labone, according to the individual, and everyone who went to Labone that year recognized her as a robber. He also disclosed that Mona has four children that she hides from the public eye on social media.