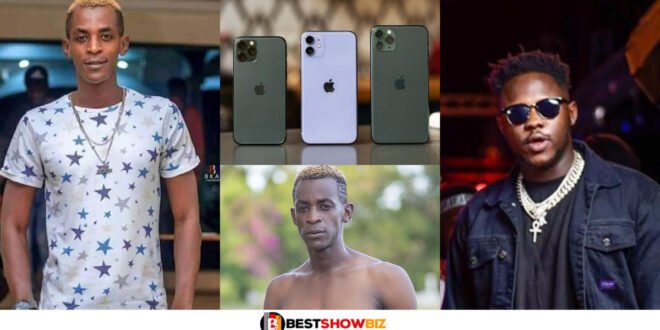 Actor Too Much reveals that Medikal bought him his first iPhone and gave him GH200 for transportation. (video)

Too Much, a Takoradi-based comedian-actor, stated in an interview that he is immensely thankful to AMG’s very own, Medikal, for what he did for him a few years ago.

The first iPhone he got to use, according to the ‘Janka Town’ actor, was purchased by Medikal.

In addition, Medikal bought the phone without his (Too Much’s) request, and he also put 200 Ghana Cedis in cash to it so he (Too Much) could travel himself from Takoradi to Accra for the phone.

Too Much also stated in the interview that Medikal has been consistently giving him money virtually every time they meet, thus he is really thankful to Medikal for the relationship they have.

Tags medikal too much