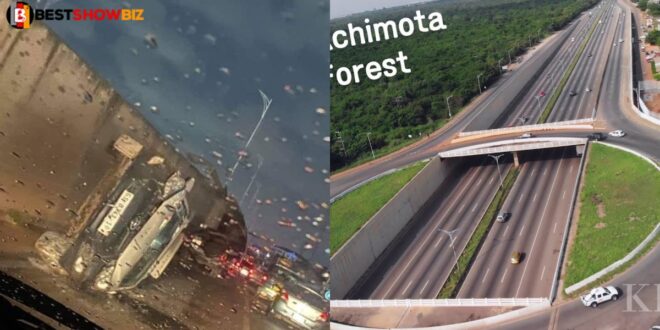 When it rains for days on end, the road gets extremely slick. When it rains, it is therefore important for drivers to be cautious and limit their speed. A Toyota car with the registration number GS 8341-19 has collided with another vehicle on the overpass.

This incident occurred in Achimota mile 7, Greater Accra Region, this morning. It’s impossible to say if the driver was sleeping or whether the car had a problem that caused the collision.

Because of the curves in the overpass, most cars do not travel at a high speed. As a result, numerous Ghanaians were perplexed as to what had caused the catastrophe. There is a lot of traffic on the lower part of the overpass. As a result, even if the driver on the bottom half of the automobile tries to evade the Toyota car from the top, he will be unable to do it.

The report did not mention whether or not there were any injuries or fatalities as a result of the mishap. After seeing this photo, some Ghanaians speculated that the driver of the Toyota car might have been injured because the car had fallen on the driver’s side.