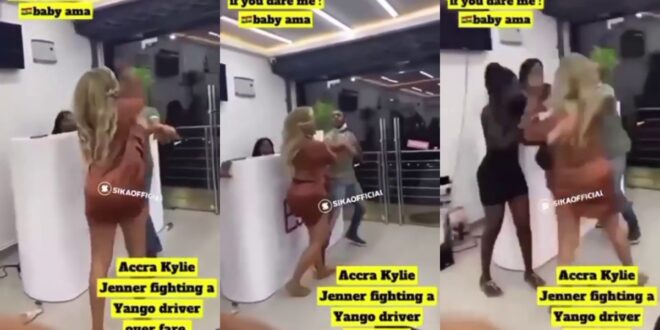 A popular Ghanaian slay queen known as “Accra Kylie Jenner” was filmed fighting with a taxi driver over a fee she was charged.

According to reports, the battle erupted because the driver refused to accept the amount of money the slay queen had agreed to offer him.

In a video published on social media, the lady claimed that the taxi driver intended to defraud her by billing her a ridiculously high fare for the ride.

Her initial refusal to pay the driver more than she expected did not sit well with the taxi driver, who demanded full payment as represented by the Yango app.

This, however, resulted in a violent altercation.

Read Also  Man offers ₵740,500 to his wife of 13-years to divorce him so he can marry a young and beautiful lady