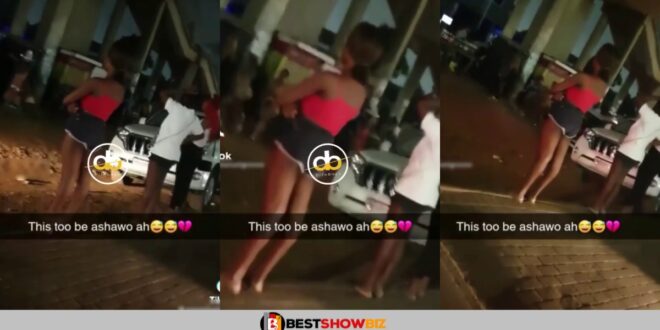 Accra: See How an ᾷshawo girl with a small nyansh was laughed at by a customer (Video)

An anonymous man chose to troll an Ashawo Lady at their preferred area near the Lapaz overhead pass.

Christmas celebrations are the busiest time of year for most business owners, including Ashawo’s, both in brothels and on the highway.

In a viral video, an ashawo male client is seen capturing a lady who appears to be a night worker with a small backside.

She was seen with her Ashawo colleagues at the roadside waiting for a lucky client for the night, and because of her body specs and small nyansh in comparison to her other colleagues, netizens believed she would struggle to compete in the business.

Read Also  'I know I will d!e' - Beautiful Girl's last words before dying in school

The unidentified man can be heard saying that she is a disgrace to the Lapaz Ashawo Association.