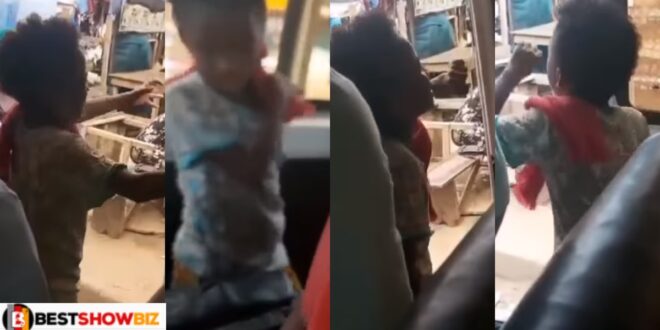 To be honest, some adult Christians lack the confidence to preach early, let alone promote the gospel during the day. This is due to their apprehension in sharing the gospel with other people.

However, a little girl was captured in Accra, Ghana, sincerely preaching the gospel to trotro car passengers. Based on her facial expression, this young girl is most likely between the ages of 7 and 12 .

The conductor was shouting “Kaneshie!, Kaneshie!!” to indicate that the passengers were heading to Kaneshie. This small girl’s fervor and energy are comparable to that of adults preaching in trotro. Nothing indicates that she was hesitant or afraid to share the gospel.
Her message was primarily about Jesus Christ’s second arrival.

She was giving advice to Christians who listen to God’s word but do not live according to it. This young girl was also addressing the problem of inappropriate attire in churches and other public places. “She stated,” she explained “Place your faith in God.

This world will pass away, but God’s word will endure forever. Mini skirts are not appropriate for church. Satan came to annihilate you. His goal is to steal, kill, and destroy, so be on the lookout “..

This girl’s words, aggressiveness, and actions while presenting the message in the trotro car indicate that she has been doing this for a long time. She is filled with the Holy Spirit, and her message to the people demonstrates maturity.

When some Ghanaians saw this video, they were taken aback by the girl’s audacity in sharing the message.

Take a look at some of the responses below: