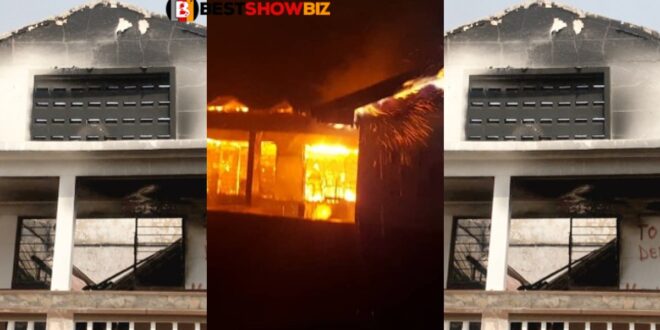 A pupil at Accra Academy Senior High School in Bubuashie, Accra, has been named as the mastermind behind all of the school’s fires.

After meeting with a committee formed to examine the incident, the 15-year-old kid was detained based on his own confessions.

According to a story published by Graphiconline.com, the kid was driven to set fire to portions of the school after being forced to join against his will.

The second-year student claimed responsibility for the past three fires, which destroyed dorms, student possessions such as luggage, chop boxes with food, mattresses, and other valuables, including money.

During interrogation, he allegedly stated that he did so because he preferred to remain a day student rather than the boarding option that was provided to him following the boarding event.

He stated that he devised a plot to fire the dorms in order to force the school’s closure.

Many fingers were pointed at him by a committee formed by school administrators to examine the fire occurrences.

The youngster allegedly confessed to the committee members and detailed how he set fire to three different dorms at the school.

He allegedly said he bought gasoline from a nearby gas station and lit the dorms on fire using a discarded mineral water bottle.

The suspect is said to have sprayed fuel in the dormitory and then lighted a match to set the building on fire during ‘prep’ time before joining his classmates who were studying.

The Ghana National Fire Service grew suspicious of the recurrent events after the first two fires in the dormitory buildings.

According to the GNFS, all three fires had a similar pattern in that they occurred around the time when all pupils were meant to be at preps.

After putting out the third fire on June 23, the fire department allegedly filed a complaint with the police on June 25.

In the company of his uncle, the kid was turned over to the school officials.

On January 15, 2020, Bestshowbiz.com reported that a fire in Accra Academy had destroyed two residence halls, the Alema and Halm-Addo halls.

Since the fire apparently erupted about 7 p.m., while all kids were at Preps, it is unknown what caused it.