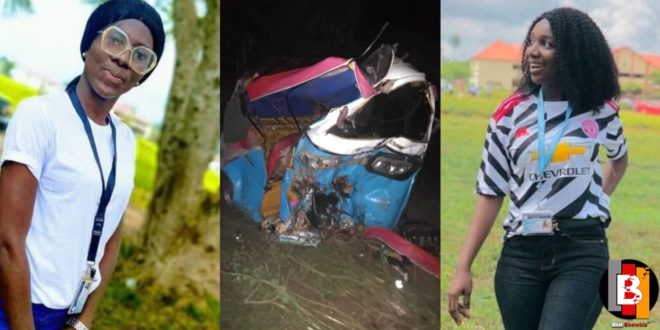 Two fresh graduates of the Delta State Polytechnic, identified as Annabel Ogaga and Oke Melissa have died after engaging in a gruesome motor accident on their graduation day.

The sad incident is said to have happened on Friday, November 13, 2020, while they were on their way to a graduation party around 8:00 p.m after writing their final papers earlier that day.

According to eyewitness accounts of the accident, a Lexus SUV that was driven by a reckless driver rammed into the commercial tricycle that was transporting the girls to the party.

Footages from the accident scene shows the commercial tricycle totally wrecked which accounts for why none on board survived. The Lexus also sustained some appreciable damages on the passenger side.

The Police spokesperson confirmed the incident and revealed that Melissa, who was of the department of Mass Communication, was confirmed dead at the spot. Annabel on the other hand was rushed to the Federal Medical Centre with the rider, where they died.

Both students were buried on Tuesday, November 17 and social media has since been awash with sad tributes from the course mates.

See some pictures below;