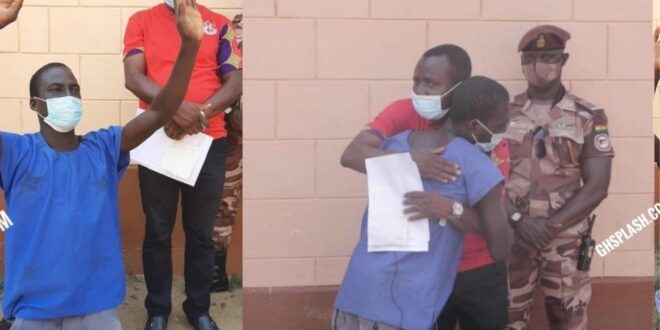 Aboboyaa driver who is in jail for giving his boss money to his girlfriend rescued.

Crime check Ghana has gone to the rescue of a young Tricycle driver who was serving 18 months in prison for squandering Ghs 1,800 which was supposed to be paid to his boss.

Below is the story of how he got himself in jail and how Crime check managed to get him out.

Hardworking Samuel Kwaku Sakyi, a tricycle rider, spent all his money on Ama, hoping to marry her.

He was so determined and faithful to the lady that he denied himself all the basic necessities of life just to make her glamorous to prevent another man from having her.

This affected his sales to his master, but Samuel insists he had already fulfilled his part of the ‘Work and Pay’ agreement with his tricycle owner, but his boss will have non of that, so got him arrested.

The court asked Samuel to pay one thousand eight hundred cedis to his boss or in default go to prison for 18 months, but he could not raise the amount. Ama had then left him.

With tears, Samuel had to go to jail. After spending two months at the Koforidua Local Prison, philanthropist, Ali Ibrahim has paid the court fine for him to start life all over again.

Samuel’s reaction when I broke the news to him that he is going home, courtesy the intervention by Ali Ibrahim.

May Allah continue to bless our dear brother Ali Ibrahim.

So the question is, couldn’t have Samuel contributed to society better if Ghana had a law on Community Service?
When other countries are using prisoners for socio-economic development, we continue to warehouse our own. So sad!