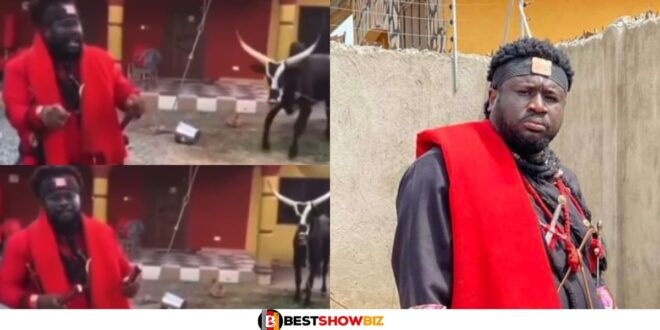 “Aboa, you want the cow to kill me”- fearful Ajagurajah ran for his life after a cow almost chased him

A new video going viral on the internet depicts the moment when the strong Archangel Ajagurajah was running for his life when a gigantic cow tied to his house decided to put him to the test to see how powerful he really was.

The chop bar Prophet has been cooking and giving gifts to his church members on a regular basis, and for Christmas this year, he decided to go all out with his members and loved ones by purchasing a large dairy cow.

In the video, he was seen telling his followers that the cow would be taken to the slaughterhouse at any moment when the cow that had been tied to a wooden pillar was running towards him.

Internet users were perplexed as to why a strong prophet with all of his spiritual protection was running away from an ordinary cow, as shown by the video posted on Instagram.

He responded on the popular video, stating, “Aboa I should stand there so it kills me,” implying that he isn’t foolish, despite his spiritual background, and wouldn’t stand there to be slaughtered by the cow.