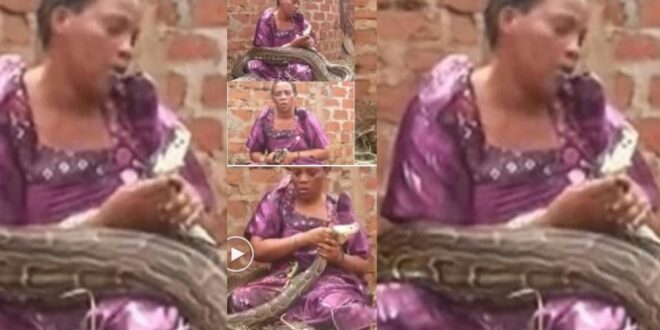 A woman was caught breastfeeding a gigantic snake and then ordered it to k!ll someone (Photo)

Residents of Nenohwe Village in Zimbabwe are said to be shocked after a woman was found breastfeeding a giant snake at her friend’s home.
According to the Manica Post, a girl was spotted  at Gogo Nenohwe as she breastfed the snake while uttering names of villagers she wanted her pet to deal with.

Following the accusation, two elderly relatives, Gogo Save Nenohwe and Gogo Ethel Sithole, were charged with witchcraft before a Chief Mutambara magistrate. On Saturday, March 13, the primary witness testified in thei traditional court about the incident.

“I saw Gogo Nenohwe breastfeeding a very big snake which had a red cloth and beads tied around it. After breastfeeding it, she took out a plate of food and fed the snake. I did not see what food she was feeding it, but I heard her muttering names of fellow villagers and telling the snake to deal with them.”