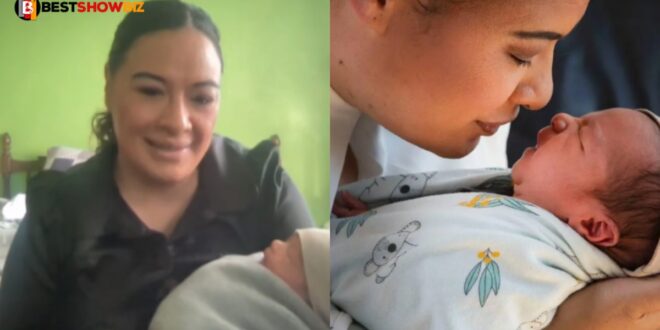 A 41-year-old mother didn’t realize she was pregnant until she went into labor and saw the top of her baby’s head on the operating table.

Originally from New Zealand, Karla Akuhata suspected that she was suffering from bloating as a result of work pressures or a medical ailment.

It wasn’t until she woke up in the middle of the night with excruciating cramp sensations that she began to “panic out” and realized she was in the process of giving birth.

Karla’s son was delivered on the floor of her bedroom, directly in front of her.
In an interview with the New Zealand Herald, she explained that “a baby’s head was bursting out of me and there was nothing I could do but go with it.”

“It was only logical to remain in that location. It was as if he was simply lying there nuzzling and making all of the small baby noises.

In some ways, the noises he was making gave me the impression that everything was well with him.
Tamarangi is the name Karla has given to her son. He came as a “complete surprise” and a “miracle,” according to her.

Karla called her mother immediately after the birth, who had been making jokes about Karla being pregnant because of her bloating for a long time.

She explained to her mother: “Mum, remember how you teased me about the possibility that I was pregnant? “Well, I’ve recently given birth to a child.”

“What the hell, Karla,” her mother exclaimed as she dialed 911 to summon an ambulance and dashed back home to see her daughter.

Before cutting the umbilical cord, the paramedics checked to make sure everyone was okay.
Stealth pregnancies, such as Karla’s, are incredibly rare, but she is not the only person to have gone through this experience.

There have been a number of cases in which ladies were unaware that they were pregnant until they went into labor with the child.

However, Akuhata’s case was particularly alarming because she had previously experienced difficulty conceiving and had been diagnosed with Polycystic Ovary Syndrome.

While she had given birth to her other son 15 years prior, she had failed to conceive since then as well.

Most people couldn’t believe it because she didn’t appear pregnant, she explained to Ryan Bridge, the host of the AM Show.

His mother, his sibling, and members of the community frequently refer to him as “miracle baby.”