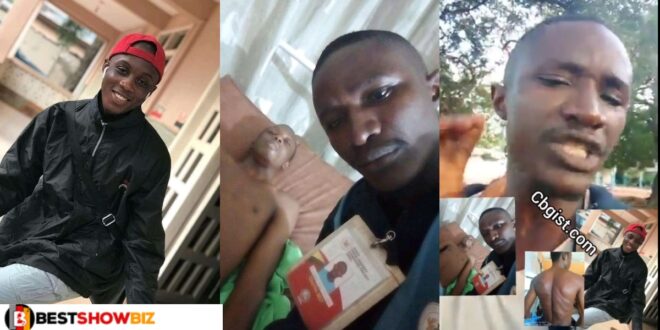 In a heartbreaking video, a Ghanaian man describes how his son, who was attempting to further his education, instead died due to circumstances beyond his control.

The man, who goes by the name Edward Mintah on Facebook, revealed that his son was a student at the ‘Late’ Presbyterian Technical Secondary School la te in Accra.

During an examination, he claims, they were told to stop working, which he believes was the beginning of his son’s premature Departure from this world.

His son took advantage of the situation by stepping on the classroom desks in a desperate attempt to hand in his papers and use the restroom while everyone else was stumbling around lot trying to turn in their Answer sheet to the teacher.

Unfortunately, his son stepped on the teacher’s table in order to complete his mission, but he failed to clean the table for his instructor.

the teacher reacted in a hasty manner by bringing out a cane that had been thoroughly soaked and lashing the boy across the back.

Unfortunately, the beating was too much for the child to bear, and he died at his home, right next to his father, as a result.

It was also revealed by the father that the issue had been brought to the attention of the school’s headmaster, who did nothing about it other than ignore the tragic event that had occurred.