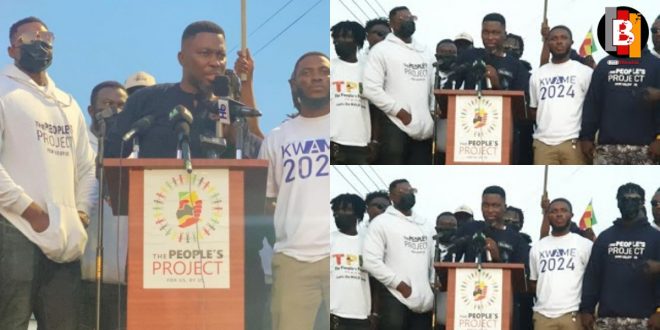 Kwame A-plus has boldly said that he would challenge for the office of the President against the NPP and the NDC in the next 4 year’s elections.

The controversial political activist who used to be a musician, on Wednesday, December 2, 2020, said that the two leading “corrupt” political parties have “failed Ghanaians” and he would come in 2024 to save the country and kick out corruption.

A-plus, the founder of The People’s Project (TPP), made this declaration during a TPP conference at their headquarters in Accra. “I am going to contest in 2024 and nobody can tell me to wait for another four years,” he revealed.

According to the political activist who is noted for voicing out against the NPP government all the time, the party (NPP) is very good but this current crop of leadership is the most corrupt of all.

“The current Government, saying they’re a bunch of corrupt people starting from the President, Nana Akufo-Addo,” he stated in a lengthy speech while addressing supporters of The People’s Project movement.

The People’s Project movement which was established by Kwame A-plus, is a Non-Governmental Organisation in Accra aimed at fighting against any political and selfish interest to achieve a better and corruption-free Ghana.