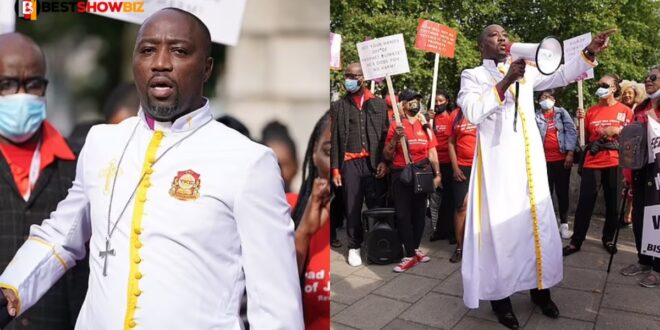 A Kenyan Pastor Charged In The Uk For Selling Fake Oils Believed To Cure C()r0nav!rus

Bishop Climate Wiseman, 46, also known as Dr. Climate Wiseman and Climate Irungu, is reported to have sold the bundle for £91, which included a small container of oil and a strand of red yarn.

The concoction was purportedly advertised to ‘treat, prevent, guard against, or cure’ coronavirus, according to Wiseman. On Monday, September 13, he appeared in Inner London Crown Court wearing a white bishop’s gown embroidered with gold crosses, a dog collar, and a crucifix.

Between March 23 and 24, the clergyman talked to authenticate his identity and date of birth before pleading not guilty to a single count of fraud and two counts of violating the Consumer Protection from Unfair Trading Regulations.

The accusations say that while doing business as “Bishop Climate Ministries,” he made false representations in person, online, and through instructional and testimonial films.

Prosecutors believe he made “false and misleading” promises about an oil mixture advertised as “Divine Cleansing Oil” or as part of a “Divine Plague Prevention Kit’s” ability to “treat, prevent, defend against, or cure” coronavirus.

Defending attorney Nargees Choudhary claimed that her client was not an “anti-vaxxer” and had been double-jacked.

She stated that he is free to practice his religion and that he is not being “dishonest” or “acting deceitfully.”

Wiseman lifted his fist in the air as he exited the building, surrounded by about 50 red-clad followers chanting, ‘We shall not, we shall not be moved.’

They blew whistles during the hearing, while one member climbed on top of a phone box and shouted ‘freedom’ and ‘leave us alone’ using a megaphone.

Judge Benedict Kelleher granted Wiseman unconditional bail ahead of his July 11 trial in the same court.