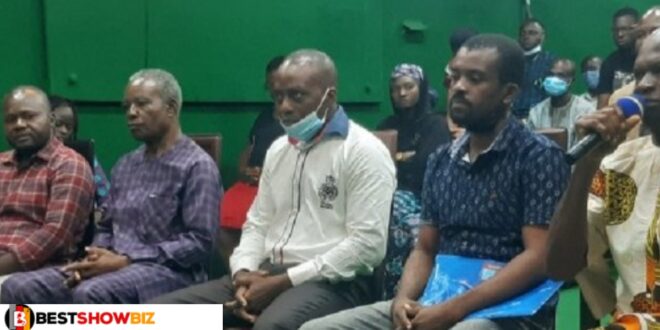 A Group Of Men Storm Radio Station To Accuse Pastor Of Chopping Their Wives, And Daughters

A gang of men is claimed to have invaded an Abuja radio station to accuse a pastor, named Pastors Harrison Anazodo Charles of Day Spring Assembly, of snatching their wives.

According to the story, the dissatisfied men went to the Brekets Family Radio studio to express their displeasure because the pastor is accused of snatching their wives, mothers, and sisters.

The pastor has been accused of stealing over 50 married ladies from their husbands while offering them lodging.

Read Also  Ejura shooting of youth: my brother died hungry, he was killed on his way to buy food - sister of shot victims reveals (Video)

Meanwhile, social media users who appear to know the location of the pastor’s church have revealed that the story of stealing people’s wives is not new to folks in his neighborhood.

His church is supposed to be on an avenue near Orifite street in Awada, Obosi, Anambra State.

See some of the reactions below…