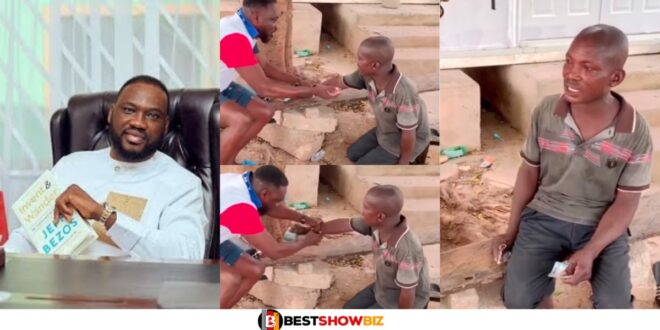 A Ghanaian Millionaire Blesses A Random ‘Shoemaker’ with GHC2000 To Start A New Business. (Video)

Ohene Kwame Frimpong, the CEO of Salt Media Ghana, has once again stunned a hustling shoemaker nicknamed shoemaker by presenting him Ghc2000 to start a business that would improve his life.

In an emotive video that has gone viral, Ohene Kwame Frimpong is shown chatting with a shoemaker he met while on his way to get his car cleaned somewhere in East Legon, Accra.

The affluent Ghanaian businessman was overheard telling this shoemaker that as soon as he saw him on the road, a voice asked him to bless his life with anything small.

However, because there were several cars behind him, he could have stopped, so he begged that if it is actually God’s desire that he aid the man, God should force him to go the way he did.

This shoemaker, lo and behold, took that way and found him. Surprisingly, the shoemaker said that he had previously taken a different path, but as he traveled, he was also advised to modify his steps, and he, happily, encountered OK Frimpong.

The owner of Salt FM asked him what he thought would be his most preferred business if he stopped working as a shoemaker.

After much deliberation and being pulled between two occupations, the shoemaker decided that he wanted to sell second-hand clothing and added that if he could acquire around Ghc2000, he was certain that everything would be OK.

Ohene Kwame Frimpong dipped his hand in his wallet and gave him the GHC2000 as soon as he said the amount, leaving this shoemaker shocked and grateful.