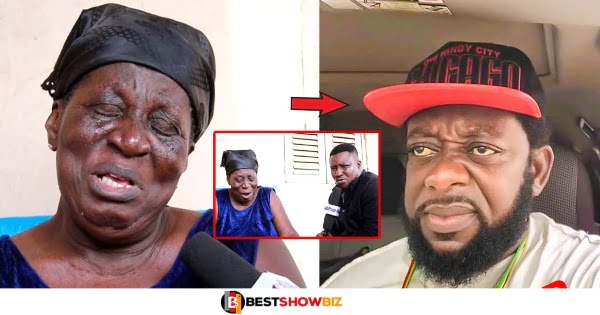 Kumawood actor Osei Tutu has been said to have died, and his mother is now saddened by the circumstances of his death.

In a new interview, the late actor’s mother said that someone in the movie business killed her son by putting a curse on him.

She says that nine (9) pins were taken out of Osei Tutu’s throat before he died by a spiritualist.

In an interview with GHPage, Osei Tutu’s mother commented regarding her son’s death:

“two weeks ago, he said he would come here but he didn’t. I called him but he didn’t answer. Later, he returned my call. I spoke to him on phone and the response was terrible“.

“I sent my youngest son to Tafo to go check up on him because I surmised Osei was unwell. My son did not return so I called him and he told me Osei was very sick so they were on their way to my end,” she said in Twi.

She responded when asked if he had any symptoms around his throat.

“my son returned and said his brother was better“.

“I asked what the problem was and he said he felt pains in the throat. He said when he coughed, he saw blood in the phlegm. He couldn’t eat, he couldn’t drink water. For the past three weeks, he hadn’t eaten,” the devastated mother said.

“His throat was not swollen, nothing showed there was a problem with the throat.”

She expressed her concern about her son’s restlessness and the significant discomfort he was experiencing. She went on to say that her kid afterward sought spiritual help.

. “He told me it was a spiritual attack from the movie industry. And that, when he sought help from a spiritualist, nine pins were removed from his throat,” the mother said.

In the video below, you can hear more from her.