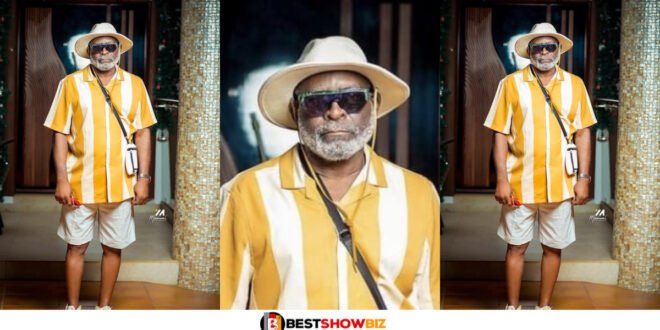 Actor and media personality from Ghana Kofi Adjorlolo, born on June 14, 1956, in Keta, is an influential actor who is widely known and hailed in the entertainment business for his contribution to Ghanaian cinema.

Kofi Adjorlolo is one of the few performers who has been able to bridge the gap between native Kumawood films and English-language Ghallywood films.

The actor is 65 years old and still going strong.

Pictures of the actor are making the rounds on social media, and his fans and moviegoers can’t get enough of his new appearance.

Kofi Adjorlolo began his career as a musician, playing the Trumpet and the Organ.

He traveled to Nigeria in his twenties and played with a few bands. He returned to Ghana and founded the Osagyefo Band, as well as performing with the Dasebre Band.

He was also a presenter at Ghana Broadcasting Corporation (GBC) and Peace FM.

He entered the film business in 2003 and has worked with Nadia Buhari, Jackie Appiah, Yvonne Nelson, John Dumelo, Majid Michel, Yvonne Okoro, and others.

In the entertainment sector, he is a legend.

take a look at his new appearance

Read Also  "Do you think you are an actor?" - Afia Schwarzenegger angrily trolls Elikem Kumordzie
Share