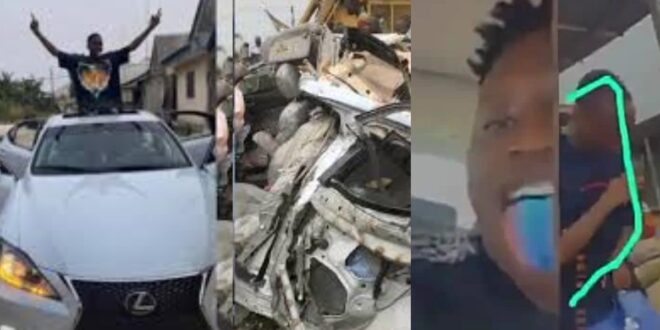 6 yahoo boys d!e in car crush with the car they bought and were celebrating with (video)

A video has surfaced online revealing the moment six boys identified as yahoo boys were killed in a car crash.

The vast majority of today’s youngsters are perpetrators of internet fraud. The majority of these youths’ parents and relatives are relieved that they are earning money.

According to “Warri aproko tv,” a Facebook page, a group of six yahoo boys were involved in a deadly car crash yesterday, and all of them died on the spot. However, prior to the tragic event that claimed their lives, these guys were seen celebrating one of their colleagues who had just purchased a new car, and it was that same car that claimed their lives via accident.

People assembled in the middle of the night to hack the car in an effort to remove their bodies, according to the footage.