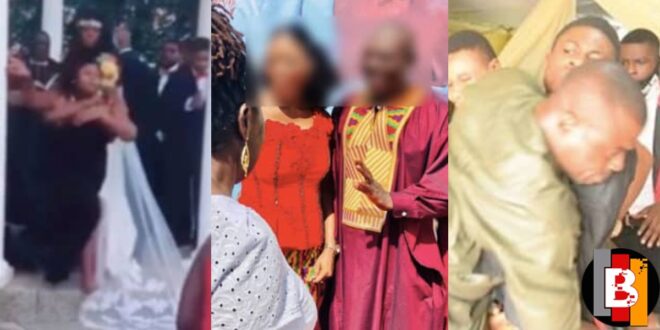 6 ladies storm the wedding of a man they are all dating to cause confusion.

After six (6) ladies stormed the wedding ceremony to create mayhem, a woman expected to celebrate and enjoy her wedding and possibly her marriage received the shock of her life.

unknown to the woman, her soon-to-be husband was a serial womanizer who was involved with other women at the same time.

According to a source, the man has separate hideouts for all of the ladies in his life, including his wife, making it difficult for them to cross paths.

A therapist told the scenario, revealing that she is currently counseling one of the females who is heartbroken over the occurrence.

I thought Richard Agu’s wedding was going to be a lesson to some men but it seems the narrative is different. I am calling out one man on Facebook today. His name is Albert Nii Akpor Anteh and works with one of the leading broadband providers in Ghana. In his mind, he think he is smart and that no one knows about how he operates.

This man recently got married to Ms. Daisy Naa Korkoi three weekends ago. This man was dating multiple women before his wedding. That isn’t a big deal for me because some men like to try on ladies before settling on one. What galls me about this man is that he is still dating other innocent women aside his wife now.

The sad aspect of the situation is that some of these innocent ladies don’t know he recently got married traditionally on a deliberately low key ceremony. Some also had the shock of seeing their boyfriend and his new wife Daisy on social media and are heartbroken.

This man lived with these ladies on a shift system, or if you will a multiple double track or multiple track system. He roamed with them in hotels and had good time with them. His main excuse was that he will relocate from his inherited place at Teshie with them to his project which he will soon be completing. This was a deliberate ploy to avoid any of the ladies picking clue on his multiple dating adventures.

Even on the Wednesday preceding his weekend marriage ceremony, he was with one of the ladies who saw his marriage pictures on the following Sunday. The pictures were his boyfriend and newly married wife, Daisy on social media.

This man lived a double life and even his closets friends do not know that he is a harem keeper. Someone will say this is a sour grapes from disappointed lover but then I was never his lover but has privy to the data about his operations.

For example, because he knows his double standards towards these ladies will be risky for a calm marriage ceremony, he invited a few friends to lower the risk of being exposed. Ghanaians in the usual docile mode will say give it to God and move on. Yes, we are going to move on but I am going to release the data about the ladies, the hotels and the names of the health facilities he went with this ladies to terminate pregnancies that occur during his time with them. This will prevent unwary innocent victims from falling prey to his predatory behaviours. Guys I am calling him out now because he hasn’t changed and will apply this his tactics again on other innocent women.

Albert Nii Akpor Anteh don’t think no one knows your methods and so you can continue to prey on ladies. The way you treated these ladies were immoral and unethical and I wouldn’t want to spill it out but I have opened a few keys today so that Daisy will know the kind of person she has gotten involved with.
To start with , you slept with these ladies without condom because you wanted a full sensation but told them they were the only ladies you were going out with. You know this is not true and I can build a website to upload the pictures and other details but considering the negative effect it will have on Daisy.

You could also have ended the relationship with all the other women when you settled on Daisy. But you didn’t care.
Dear men if you start something with a lady and don’t have any plans for her kindly leave her alone for the guys who are ready to come on board. Don’t waste their time until your wedding night and still continue pursuing them after your marriage. At least let them know you’re now married. Your new wife, Daisy, may be an innocent lady to your predatory behaviour and whatever this ladies say.

This is just the first chapter of a longer running series. I am waiting for him to reach these heartbroken ladies and apologise individually to them. Any attempt to defend indefensible will mean a website will be built giving pictures of these victims, the bars, the food joints and hotels. This will be truamatising to his new wife but it will help heal one of the victims who is my patient. I am a therapist who helps people recover from deep betrayals.

When Agu’s issue came you were so much on the topic all because you find yourself in the category. You think you have succeeded by swerving these multiple ladies to marry the love of your life but little did you know your dirty clothes will be washed outside.

Daisy may not know the sordid details of your predatory behaviour but she is just about to know the kind of man she tied the knot with. Winniefred Narh #brokenheart.