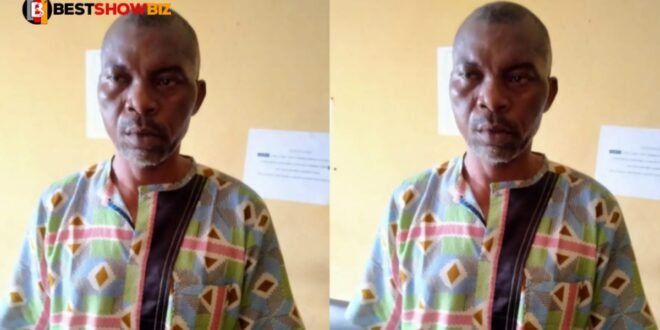 Men from the Ogun state police command have arrested a 48-year-old butcher named Segun Taiwo in connection with the death of his 50-year-old female friend, Abimbola Olusola, whose body was discovered by the roadside in the Aro area of Abeokuta.

The suspect was apprehended after Lafenwa divisional headquarters received information that a woman’s corpse had been discovered on the roadside in the Aro area of Abeokuta.

The DPO at Lafenwa dispatched his men to the scene after receiving the information, and the body was recovered and deposited at the mortuary.

On the order of the commissioner of police, CP Lanre Bankole, the case was then transferred to the state criminal investigation and intelligence department for further investigation.

According to DSP Abimbola Oyeyemi, the state police command spokesperson, CSP Femi Olabode led the homicide section there and then embarked on a technical and intelligence-based investigation to unveil the mystery surrounding the deceased’s death.

According to him, the investigation led them to the Obada Oko area, where the suspect lives, and they were able to apprehend him.

During interrogation, the suspect initially denied knowing the deceased, but when evidence linking him to the deceased that had been in the possession of the police officer prior to his arrest was presented to him, he had no choice but to confess.

He admitted to the investigators that he had been dating the deceased since last year and that he had invited her to spend the night with him on Sunday, October 31st because his wife was not at home.

The deceased began to show signs of illness around 3 a.m. after they had sex together, and before he could intervene, she had passed away.

He went on to say that he loaded the body into his car and drove it to Aro, where he dumped it.

After being questioned about his behavior, he stated that he did so out of fear.