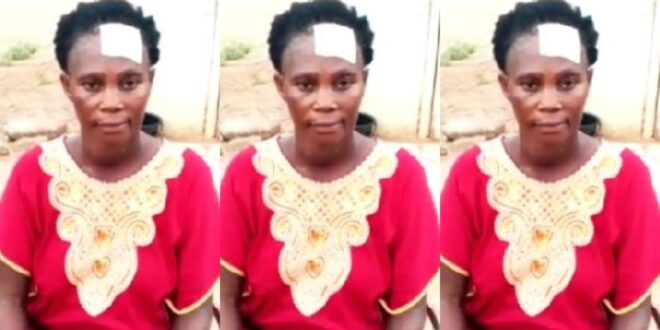 46 years old woman Ama Bono, butchers another woman with a cutlass over Ghc 7000

Ama Bono, a 46-year-old woman, is being held by the Wassa Akropong Municipal Police Command for attempting to murder Patricia Oduro, a 45-year-old woman, for the amount of 7,000 Ghana Cedis.

The incident took place on Monday evening in Wassa Japa, in the Wassa Amenfi East Municipality of the Western Region, where both women operate as ‘galamsey’ operators and live in the same building.

Patricia Oduro described her ordeal by saying she gave Ama Bono three thousand cedis to invest in a galamsey company, which yielded an additional four thousand cedis after a few months.

She clarified that she needed the money to cover her two-year rent and use some of it to start a “chop bar” store.

Ama Bono then invited her to accompany her to a galamsey site where she could raise the money.

Ama crushed Patricia’s forehead and neck with a stick she was carrying in the middle of the bush road on their way to the galamsey place, then inflicted machete cuts on parts of her body, knocking her out.

Patricia claims that when she regained consciousness on Tuesday morning, she cried for assistance, prompting several galamsey operators in the area to come to her aid.

She then told her rescuers that Ama Bono was the one who had done everything to her. Patricia’s uncle, a former police officer, was informed by the rescuers, who also forwarded the case to the Wassa Akropong Police Command.

The officers, along with members of the group, arrived at the scene, where Patricia was lying in a weakened condition. Ama Bono was arrested after patricia was rushed to the Wassa Akropong Government Hospital for treatment.

The police are reviewing the matter, and Ama Bono will be arraigned in court to face the full force of the law.

Patricia Oduro, meanwhile, has been released from the Wassa Akropong Government Hospital.