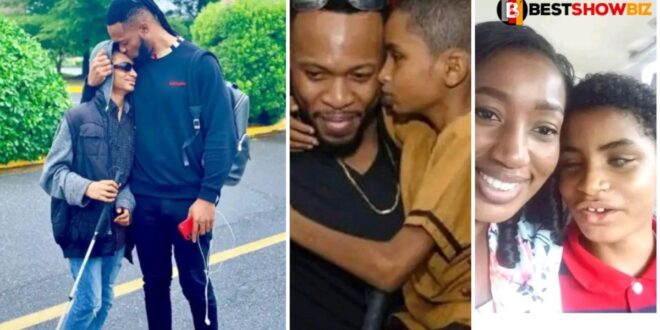 4 Years After Flavor Picked a Blind Boy On Street And Adopted Him, See his current photos

Flavor first met the child in Liberia in 2017, and since then, God has used the music superstar to transform the boy’s life.

Semah G Weifur, a Liberian blind child, was observed singing alone in a classroom; the boy is a gifted musician and a food connoisseur.

According to a report by Vanguard, Semah was born blind and into an impoverished family. He was cared for by the Christian Association of the Blind, a Monrovia-based NGO (CAB).

Following Flavor’s discovery of Semah G Weifur, the two cooperated on the release of a new song called “God you are the most high” and the youngster was overjoyed to meet his idol.

At the 2018 edition of the renowned AFIMMA, Semah received the “Shining Star” award. The African Music Magazine Award 2018 (AFRIMMA) was hosted in Texas for the 5th time.

Flavor embraced Semah as his kid and vowed to look after him, and in 2019, he traveled to India with the little boy for eye surgery, despite the fact that the young boy was unable to restore his sight.

God is working wonders in the life of this little child through popular artists. Flavor is a Nigerian singer who can sing in his native tongue fluently. He is from Anambra but was born in Enugu.