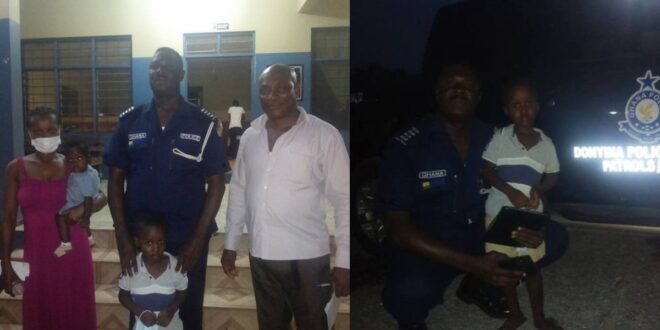 A mother identified as Nana Afia has shared her ordained on how her 4-year-old son reported her of trying to kill his little brother.

according to this mother who took to a Facebook platform called ‘Tell It Mom’, her 4-year-old son reported her to the police at Donyina Police in the Ashanti Region after she slipped and drop his little brother while bathing him.

sharing the photos from the police station, the mother wrote;

“Just this Saturday, my 4-year-old son reported to the officers in the picture that I dropped his baby brother whiles bathing him and that I want to kill his brother so they should come and arrest me,”

she further disclosed that she was there and the police together with her 4-year-old son came to the house to arrest her, she was invited for questioning.

“I explained my part of the story to them and they examined the baby for physical injuries”  she added.

her post has since generated lots of comments both funny and weird looking at how a four-year olf boy got the gust to the police station and report her mother.