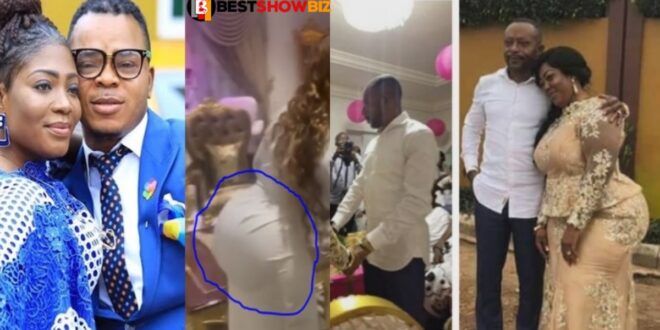 It’s true that Ghanaian pastors love curvy women with big backsides, as a man of God confessed on live television.

Obofour spoke from personal experience and encounters with other ministers in the country.

We noticed recently at Rev. Obofour’s birthday party for his beautiful wife, Ciara Antwi, aka Bofowaa, that liposuction is not just for slay queens, but also for pastor’s wives.

Owusu Bempah with his third wife

Pastors in Ghana love curvy women with big backsides, as shown below.

Even though Rev. Owusu Bempah’s marriage with this woman ended in divorce, she remains on our list of pastor’s wives with curvy bodies.

Our sources say Rev. Owusu Bempah had three failed marriages, all with women of thick, curvy stature– tell me if finding those women was just luck.

Why is this couple so shocking? Because the old Florence Obinim wasn’t as curvy as the new.

Don’t tell me she had a good life and gained weight in the right places, because she is richer than Obinim.

In fact, social media users were stunned to see Obinim’s wife’s heavy curves. Because she wasn’t as curvy as she is now

The “Osoro Ne Mefie” singer went MIA. We learned she had moved to Germany. She returned with heavy baggage.

Many believe she has had liposuction because her transformation is too good to be true.

The ultimate couple, slayers, and preachers.

No preacher in the country can match the Obofour family’s swagger.

Almost every Ghanaian will name the Rev. Obofour as a pastor who is proud of his wife’s curves.

When the Anointed Palace Chapel founder was preaching, he told his wife to stand up and show off her body.

Being a pastor’s wife doesn’t stop Queen Ciara from flaunting her curves on social media.

Her looks and wealth have made her a huge online celebrity.