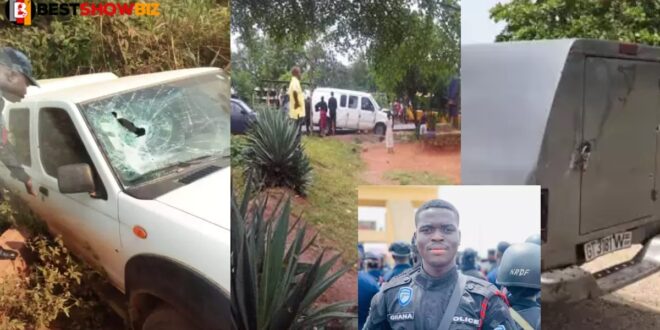 3 bullion van robberies that have shocked Ghanaians in 2021

Following the attack on a police officer moving cash from a bank in an SUV in Jamestown, Accra on Monday, June 14, the safety of police officers who provide protection for banks when transferring cash is a hypocritical trend. Police Officer Constable Emmanuel Osei was killed in the attack.

The Ghana Police Service, according to its PRO, made a statement describing the vehicle as a bullion van in response to the regrettable incident and the difficulties that arose. Is the Ghanaian police aware of what a bullion van is?

As a result, we will tell you about three recent incidents in which police officers were attacked in a Ghanaian-style bullion van, an SUV with a covered bucket, and a padlock.

With this recent attack, a gang of armed thieves has defeated and killed armed police officers for the fifth time. A police officer did survive on one occasion, but even then, he was ambushed by armed bandits and his firearm was snatched from him.

Some of the thieves have been apprehended by the Ghana Police Service, while others are still being investigated. Several police officers have been killed in bullion van attacks by armed robbers in Adansi Fomena, Baatsona, and the most recent incident in Jamestown, according to this source.

On Tuesday, January 19, 2021, armed robbers assassinated a police officer who was on escort duty on the Adansi Fomena route in the Ashanti Region.

During the raid on the bullion van, the guys, numbering in the tens, allegedly shot Corporal Martin Babah. According to sources, Eric Amoah, 36, and Emmanuel Boateng, 36, both Delta Security Services employees, were driving the truck with the registration number GT 543-19.

The robbers allegedly stole GH 500, 000 from the van and the assault AK 47 rifle held by police officer Babah during the incident, which occurred about 10.30 a.m. on the stretch of road between Obuasi and Adansi Asokwa Junction on the outskirts of Adansi Nyankumaso.

The incident was reported as ” robbery and murder” in a police report, and the date was given as January 19, 2021. From behind and in front of the truck, the men opened fire indiscriminately.

As a result, the bullion van’s driver was forced to come to a halt. Despite the fact that the two private security guards were unharmed, Corporal Martin Babah was shot and killed on the spot by the criminals on the left.

The driver allegedly then handed over the keys to the robbers, allowing them to access the money in the van when they needed it. The guys loaded the money and the AK 47 rifle into the truck.

In a broad daylight heist at Baatsona on Spintex Road, Accra, on Monday, March 1, 2021, about 3: 30 pm, four suspected armed robbers ambushed a bullion van and seized an unspecified quantity of money, shocking locals and observers.

When they intercepted the so-called bullion van amid indiscriminate shooting, the robbers were driving a black Toyota Camry with the registration plate GX 6337-14 and an unidentified motorcycle.

The bullion van’s driver and a passenger were able to flee, leaving the police officer escorting the vehicle at the mercy of robbers who took his service rifle and brutally assaulted him. According to the authorities, an unidentified sum of money was stolen during the attack.

At the time, DSP Efia Tenge assured the media that no arrests had been made. She rushed to aid because the Baatsona Division police patrol squad received information from the police control room that a robbery had occurred at Dampong Hospital and Pharmacy on Spintex Road. She stated the team noticed a Toyota Mobile Banking van parked on the side of the road when they arrived.

” The thieves had already finished their operation and were gone, but the inspection of the vehicle showed that the locks and hinges on the bucket were broken and the glass was riddled with bullets that were suspected to be AK 47s, ” DSP Tenge added.

Armed thieves killed Police Officer Emmanuel Osei and a witness, Afua Badu, while transferring money in a bullion van in Adedenkpo, a suburb of Accra, on Monday, June 14.

In a cab and on a motorcycle known as a ” okada” the criminals pursued the victims. When the armed robbers arrived at a less congested place, they opened fire indiscriminately, killing the bank’s police officer instantaneously.