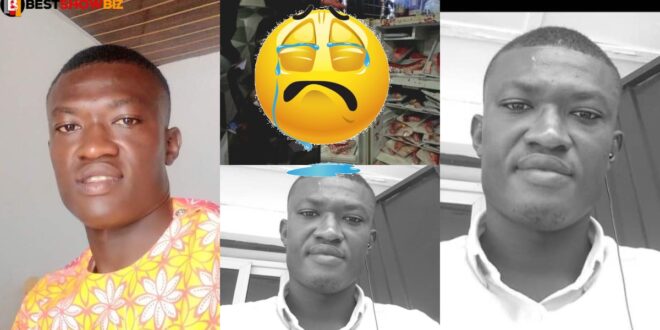 28 years old man in sunyani arrested for k!lling kids and cutting them to pieces in his fridge. (video)

Richard Gyamfi has been identified as a serial killer by his Sunyani neighbors.

The 28-year-old was apprehended in Sunyani’s Alaska Junction in connection with his missing brother’s killing.

Richard Gyamfi’s missing 12-year-old brother was discovered dead in a structure at his home.

His mother reported him missing, and several members of the community claimed they last saw him with Richard Gyamfi.

When Richard Gyamfi was questioned if he was with him, he said yes, but the boy said he was heading to his mother’s house.

The mother and the neighborhood residents proceeded to the police station to report the boy missing, then returned to resume their search.

As they resumed their search, the mother stated that something tells her that her older son, Richard Gyamfi, is aware of her younger son’s whereabouts.

So the neighborhood lads carried the search to Richard Gyamfi’s house and searched all of the structures there except one, which he assured them had no one living in it because the previous renter had evacuated.

This did not deter them from continuing their search in the house.

One of the neighborhood youngsters went behind the building where Richard Gyamfi said the occupants had left only to hear the sound of a working refrigerator.

He looked through the glass and saw the missing youngster lying on the floor.

Read Also  Grand p's girlfriend finally breaks up with him

His suspicions were validated at that time, so he encouraged the other neighborhood lads to hurry and call the cops.

When the cops entered the building, they discovered the missing child had died.

When they opened the refrigerator, they discovered more bodies inside.

One of the bodies was that of a young child who had been missing since last week.