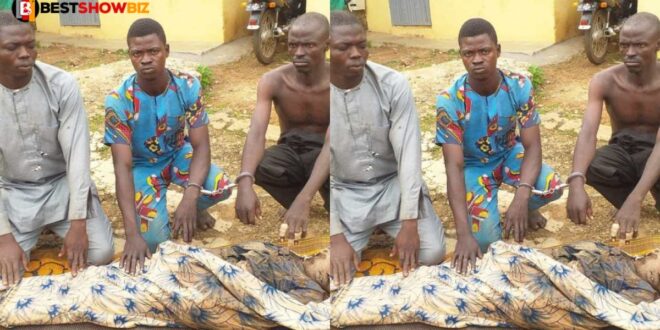 The Nigeria Security and Civil Defence Corps (NSCDC) has arrested a 25-year-old man named Ismail Saliu for the suspected murder of his 14-year-old sibling, Azeez Saliu.

Ismail allegedly plotted to kill his brother for a money ritual with the help of a herbalist and another individual.

Babawale Afolabi, a spokesman for the Nigerian Security and Civil Defense Corps (NSCDC), verified the development in Ilorin, the state capital, on Saturday. He said the event occurred on the penultimate Friday in Kosubosu, the headquarters of the state’s Baruten local government area.

“On Friday, September 13, 2021, NSCDC operatives in Kosubosu divisional office received a distress call from a community regarding unusual movement of some individuals in their vicinity.

Read Also  Take a look at how Otele and Mmebusem with their wives showed that love isn't about appearance.

“A herbalist, Ahmed Nkwe, 44, lsmaila Saliu, 25, and Saliu Ahmed, 30, were detained after police from the divisional office and operatives from the anti-vandal patrol squad in the region sprung into action,” he said.

The suspects lured the deceased to a farm, where he was brutally murdered by his own blood brother, lsmail Saliu, according to Afolabi.

He went on to say that luck ran out of the suspects as they were apprehended by NSCDC officers on their way back from the farm.

“The major suspect, who is the deceased’s brother, has admitted to personally slaughtering his own brother with the help of the herbalist and another person,” Afolabi continued.

Read Also  A Plus and wife Akosua Vee welcomes newborn baby into the world.

The suspects have been handed over to the police for further investigation and prosecution, according to the State Commandant of the NSCDC, lskil Makinde.