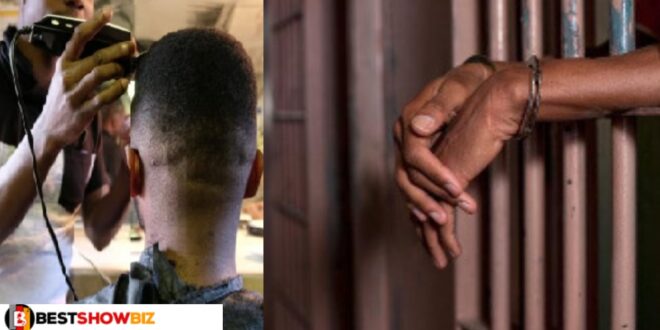 According to Kasapafmonline, the Mpraeso Circuit Court sentenced 23-year-old barber Kwame Amponsah to 114 years in jail.

The young man was imprisoned for sodomizing 12 schoolboys in Atawase, a neighborhood of Nkawkaw in the Kwahu West Municipal Assembly.

In an interview with Agoo News, Victor Fayi, the Head of Kwahu West Social Welfare Department, stated that on the 5th of November 2021, officers went to the field after receiving information that a young guy in the community who is a barber was sexually abusing school children.

According to him, armed with that information and with the assistance of the Assemblymember and opinion leaders, they were able to apprehend the culprit.

Read Also  Sista Afia ‘attacks’ popular photographer, pulls a gun on him - This Is Why

“From there, we had to send him to DOVVSU, which is part of the Ghana Police Service, and the interrogation began, and the guy was reminded for seven days,” he explained.

According to him, ten additional students arrived to report the same situation, and the man admitted that he did indeed slept with the children.

Victor Fayi said that on the 15th of November, 2021, the suspect was taken to the Mpraeso Circuit Court, where he went through the process, admitted guilt, and was sentenced to 114 years in prison.

Sampson Sarfo, the Assemblyman for the area, expressed disbelief over the occurrence, saying it was the first of its sort in the area.

He stated that parents will be involved on a regular basis to monitor their children in order to avoid future instances.