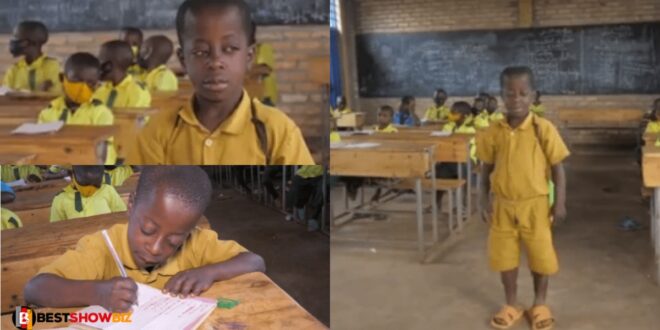 21 years old boy repeats in class one for 15 years, his teacher was even his classmate.

This student’s story may seem unbelievable to you, yet it is true. He is a primary one kid who, due to his mental problems, has been repeating the same class for several years.

This pupil, despite his diminutive stature, is 21 years old. According to a YouTube video by Afrimax, he has been in the same class for 15 years and continues to repeat it while others in his class have finished and gone on to become physicians, pilots, and other professions.

The instructor who is teaching him in this class was also one of his classmates when he first entered school, but she has since switched to being his teacher.

According to the student, he frequently forgets what he has been taught in class. Other kids bullied him and called him names, but he was not deterred by their actions because he was passionate about learning and believed that he would graduate one day.

The young man aspires to be the president of his country, but due to his poor performance, he remains in the same class as other students.

Her mother stated that her son is devoted to school and that no one could stop him, but that he suffers from a mental disability that causes him to forget things easily. She stated that because of the obstacles he was having, her son would eventually purchase something other than what she had instructed him to get.