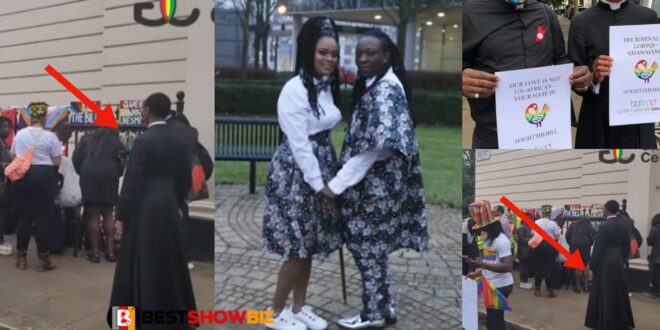 On August 21st, Ghanaians from around the UK took to the streets of London to protest against Sam George’s brutal anti-LGBT law.

It took a lot of people to come up in London to support an unpopular viewpoint in Ghana, according to protest reports.

The demonstration was led by two priests who openly support the LGBT viewpoint.

In Ghana, religion and culture are utilized to condemn and criminalize the LGBT.

Sam George, MP for Ningo Prampram, is spearheading the charge with a private members bill.

With the “Promotion of Proper Human Sexual Rights and Ghanaian Family Values Bill 2021”, all LGBT acts in Ghana are criminalised and punishable by imprisonment

It even goes so far as to imprison those who support the LGBT community.

The measure has majority support in Ghana, but not in the diaspora.

Protesters marched through London to the Ghanaian High Commission to be heard.

In a statement, they called the law “homophobic, anti-human rights, and anti-love.”

Some foreigners came to support the cause.

See protest scenes in the video below…