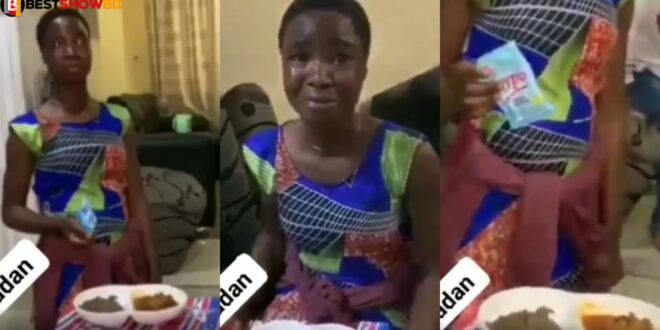 An 18-year-old househelp in Ibadan, Nigeria, has been accused of poisoning her boss’s food.

The employer is seen confronting the maid and accusing her of putting something in his dinner in a viral video.

It’s unclear what made the boss suspect the maid of tampering with his food, but he was overheard ordering the maid to eat the amala and soup that had been set aside for him.

The househelp was apprehensive about eating the dinner, noting the soup was awful.

The manager then accused her of poisoning the meal, which the kid insisted she didn’t do.

The police then threatened to arrest the househelp, who had only lately been hired by the family.

When her possessions were examined after her boss asked it, they discovered a pack of Hypo bleach.

She sobbed and blamed the devil when asked what the bleach was for.